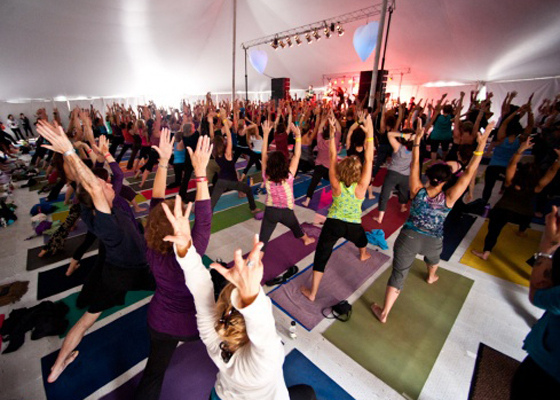 A couple of weeks ago we trucked up to Wanderlust at Stratton, Vermont to help run the booth for Kripalu Center for Yoga & Health. This incredibly wet weekend was a perfect opportunity to take the Jade yoga mat for a test run. You might be wondering, what is vinyasa yoga? Vinyasa yoga incorporates a variety of poses that engage and strengthen your core muscles.

Jade yoga mats have surpassed most brands as the eco-mat to beat, and there is good reason. The origin story of the Jade, according to their website, tells of B.K.S. Iyengar instructing a class when he began to slip on an oriental rug. A pupil removed the rug, leaving the sticky rug pad behind which allowed Iyengar to find traction. Jade Industries had been making non-slip, natural rubber rug pads since the 1970s and after being approached by a yogi in 2000 to produce sticky mats for yoga, they started applying their knowledge so that practitioners could engage in their asana practices slip-free.

There are some simple facts about Jade mats that either draw or deter, depending on yogi’s choice.
-They are uber sticky. The mats have been known to pick up lint due to stickage power. However, if you are looking for a solid foundation with grip, this is it.
-The mats smell of rubber. I actually like the smell. Some, however, feel it is strong.
-The mat is heavier than some, depending on which model you choose. Jade does produce a lighter mat for portability. 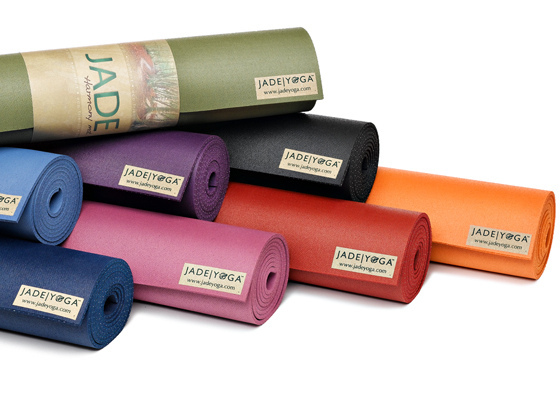 Jade plants a tree for every mat sold. The mats are made in the U.S. and the company implements philanthropic efforts through partnerships servicing underprivileged populations, such as homeless shelters, children’s orphanages in Africa, and educational programs both domestically and abroad.

With sleeping bags, boxes of Kripalu catalogues, and two huge crates of Jade Yoga Mats to loan to Wanderlust participants, we arrived in the dark to a torrential downpour. We proceeded up the mountain to camp out* with our co-worker Brenda who choosing Camping Tent Accessories. *note: Jade yoga mats make decent sleeping pads too 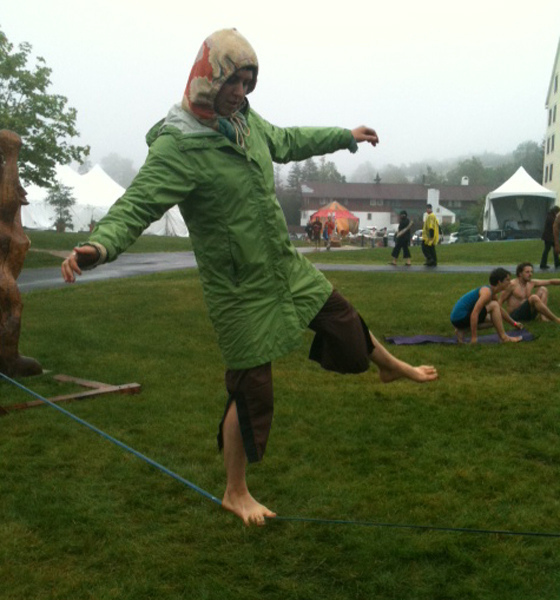 Wanderlust: Day One
Misty mountain morning in the green peaks of Vermont. Our friend Maddie, who was assisting, brought me outside to a surprise stash of mountain bikes for our trek down the hill back to the village to pick flowers, set up our table, and plan our yoga sessions in between manning our booth. As we descended in the quiet fog, the mountain felt still. We tucked two Jade mats under our backpacks. They are crazy sticky so we knew they wouldn’t roll off our backs down the mountain. The calm quiet peak was subtly brimming with hundreds of avid yoga-folk from all over. We made our way to the Gaiam tent once our booth spot was set.

Seane Corn brought us through some sun salutations as the rain grew louder. “We will probably have to stop at some point, especially if there is thunder and lightning. Being on a mic and wired up here on stage, with this big head of hair, I am first to go!” she quipped. Water dripped in spots from the roof of the tent and thunder grew louder. The plastic platform floor was wet when we entered but as the rain pounded down, it seemed to be getting worse. Wanderlust staff peppered the space as they used their walkies to monitor the skies.

Downward dog-Adho mukha svanasana-hands seem to stay. Head lifts, I look forward and there they are, soggy hands, staying put.

Small cobra-Bhujangasana-gently lift the head and draw the shoulders back.

Back to downward dog, and wet hands still seem wet, but they stay in their place. 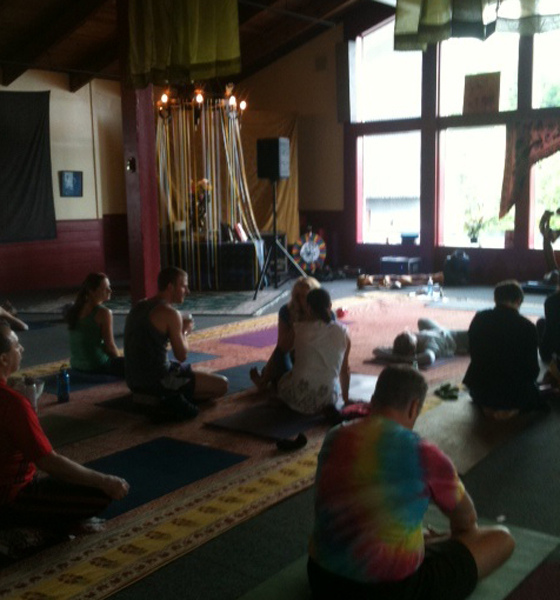 Class One, Two, Three, and Jade holds up. I bring a small towel, in case, but there is no slide.

Wanderlust: Day Three
Deep stretching for achy bones. First class, inside. Second class, outside in a tent. Raining again, but no one cares – too much bhakti bliss to notice as yogis squeeze into every last nook of the tent for a class by Elena Brower. Jade keeps me cush.

We were totally saturated for four days straight, but Jade held tough. Thank you, Jade.

It Starts With a Lightbulb