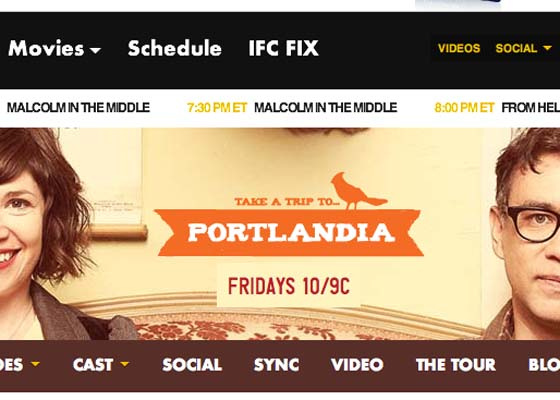 I was raised in the great state of New York, but as a teenager in the 90’s, I totally idolized the Pacific Northwest – everything from the music (Temple of the Mother Love Bone JamGarden!) to the clothes (plaidplaidplaid) to the beer. I even thought the guys from there were cuter. (The fact that my boyfriend today is from Oregon is no random thing – when I first heard about him via our mutual friend I remember being really excited about the detail that he was from the Northwest).

In the last year or so, I’ve gotten to travel to Portland and Seattle, and it’s pretty much as awesome as I was expecting. (I even had a ‘dream achieved’ joy-meltdown in a bar in Eugene, OR). So I was really worried when I first heard about the IFC show, Portlandia. I knew and liked Fred Armisen, and I thought I recognized co-creator Carrie Brownstein from somewhere….. but I was concerned the show would be stupid and everyone would laugh (or, not laugh, I guess) at it.

How wrong I was! While not every sketch is full of unicorn-popsicle-awesomepower, many of them are fall-off-the-couch hilarious. Both my grew-up-near-Portland boyfriend and I enjoy it muchly. Watch it!

A fun Eco Chickie-ish sketch below about recycling will whet your palate. (Oh, and Carrie Brownstein? She was the lead singer for Sleater-Kinney, a band I have been listening to, on and off, since I was 17. She must be the coolest girl in the world, sigh.)