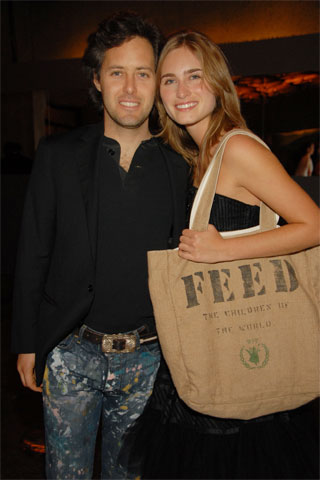 Twenty-four-year-old Lauren Bush let the word out in September that she’s launching an eco-friendly fashion line, although her decision to name the line Lauren Pierce has raised some eyebrows.

But for George Bush’s neice, it’s probably not easy being green when someone like Robert F. Kennedy states that your uncle “George W. Bush will go down as the worst environmental president in U. S. history”! And Lauren Bush isn’t alone in having different strokes from her politically high profile family folks. Just look at Newt Gingrich’s activist sister Candace. 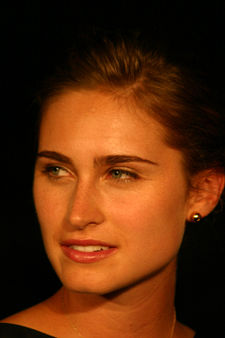 But I give Lauren Bush “cool” points for her principled achievements. As an anthropology student at Princeton University in 2005, Lauren went to Chad as a student ambassador for the United Nations’ The World Food Programme.

In 2007, Lauren Bush designed a bag for FEED Projects, which she started with Ellen Gustafson, a former UN Communications Officer. This raised recognition and over 5 million dollars for the UN World Food Programme. A portion of each “FEED 1” bag sold brings hope of an education to an underprivileged child and supplies him/her with meals for an entire school year. Each “FEED 100” bag (available at Wholefoods) provides 100 meals to children in Rwanda. Many celebrities have been caught rooting for the FEED bags, like Desperate Housewives star Marcia Cross and Lauren Bush’s friend- PETA activist Elizabeth Berkley.

Lauren Bush is a serious Fashion Diva, as her modeling has been featured in Vogue and Vanity Fair magazines, and with Tommy Hilfiger, Abercrombie & Fitch, Isaac Mizrahi and Gai Mattiolo. She is signed with Elite Model Management- the agency that America’s Next Top Model winners sign with. Although Lauren’s degree is from Princeton, she also studied fashion design at Parsons The New School for Design in NYC and Central Saint Martin’s College of Art and Design in London.

I find it interesting that Lauren’s taste for fashion and eco-adventure extends to her personal relationships. She’s now dating…

…..Ralph Lauren’s son David Lauren. But formerly she was rumored to have dated David de Rothschild, a British banking heir, eco-adventurer and explorer who has also studied natural medicine. In his efforts to generate an understanding of climate change, David founded Adventure Ecology and wrote the Live Earth Global Warming Survival Handbook.

So let’s give this girl some credit- Lauren Bush’s accomplishments are nothing to sneeze at!

It is not yet known which retailers will have the Lauren Pierce 15 piece collection, though the items will range in price from $50- to $350- wholesale. And a percent of the profits will go towards helping women in African communities that Lauren identifies with through her experience with the United Nations.

For more, check out the great WWD article on the line.