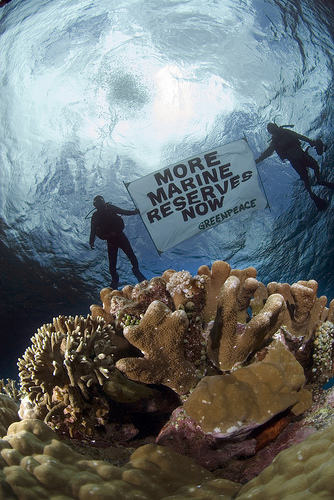 This week Greenpeace released the second edition of a seafood sustainability report rating North American supermarkets. The initial report gave a failing grade to every single market, including the modern green mecca of Whole Foods. At the time of the first report, not one of the markets had policies in place that guaranteed environmentally conscious practices. In this recent report, four markets received passing scores, indicating a minor shift in purchasing.

Whole Foods made it back up the list to the number one spot, with Trader Joe’s coming in almost dead last at number seventeen. Many stores continue to stock “red list” seafood such as Chilean sea bass and swordfish. Some companies have made strides, but not one supermarket cited in the report has made a solid commitment to avoid seafood from fisheries that harm other sea creatures such as dolphins, sea turtles, and seals. All supermarkets rated still sell destructively fished and over-fished species, although some are faster to improve sustainability by refusing to sell certain items, including shark and orange roughy. Seafood sales currently amount to approximately $16 billion annually.

“While many supermarkets seek to green their image, the bottom line is that they are contributing to the crisis facing our oceans,” said Greenpeace’s Oceans Campaign Director John Hocevar, a marine biologist. “The initial steps being taken to implement sustainability policies and practices are the right ones but bigger strides are needed to prevent the collapse of our marine ecosystems.”

To help ensure the long-term sustainability of fisheries and marine ecosystems, Greenpeace advocates the creation of a worldwide network of marine reserves and fisheries management based on a precautionary, ecosystem-based approach. Today, supermarkets can help the oceans and meet consumer demand for sustainable products by refusing to sell seafood from fisheries that:

And what can you do? Many feel that eating fish is no longer a viable option since various species are being depleted at such an alarming rate. If you do eat fish, you can print out one of these wallet cards from the Monterey Bay Aquarium, and reference it when making seafood and fish choices. Also, shop at a local fishmonger rather than the supermarket, if you can. There you’ll be able to cultivate a relationship with the fish-sellers and you can work with them to make sure you’re getting locally-caught, sustainable seafood and fish. Ask questions.