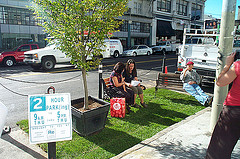 The cool folks at Rebar (San Francisco-based art collective) in conjunction with The Trust for Public Land (TPL) sponsored PARK(ing) Day in SF on September 21st, which consisted of transforming metered parking spots into real parks— complete with sod, a bench and a tree… until the meter ran out.

The goal of PARK(ing) Day is to reprogram the urban surface by reclaiming streets for people to rest, relax, and play, and to:

Promote a critical dialogue among artists, designers, activists, citizens, corporations, and government regarding the need for urban open space and they way in which streets are currently used.

Connect artists, designers, and activists with ways to permanently reclaim the street for people.

Rebar’s site diagrams how to build your own PARK(ing) site. A PARK(ing) site was even created in San Francisco mayor Gavin Newsom’s own personal parking space at City Hall! More photos of the SF event can be seen here. Its great to see an initiative to create more parks in urban areas — way to go Rebar!

“We want to protect our lands, but we also need to awaken the people in The North. You are living in a dream, what you are doing is destroying the Earth.”

Glassphemy!: A Creative Recycling Center For Glass and More