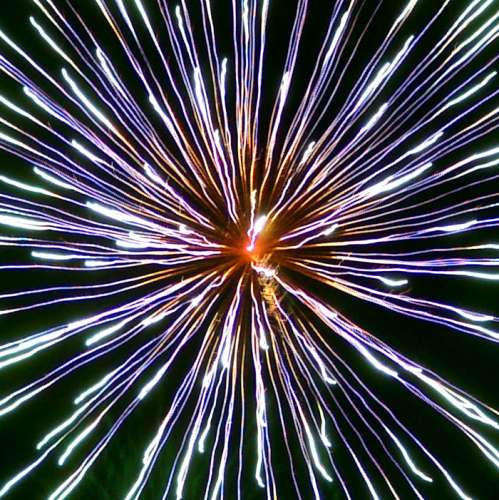 Biking to work on the morning of July 5th I noticed scattered remnants of brightly colored paper. In some places boxes were piled and charred remains of something were close by. Fireworks. There was litter from exploded fireworks everywhere. The night before, in the Capitol Hill neighborhood, it sounded like a warzone…not unfitting for this present moment! And it was not easy to catch some rest through that noise which raged into the night.

In Chinatown in NYC one year I attended a day of the Chinese New Year celebration and it began to rain. The water that snaked along the edges of the streets to the gutters was a kaleidoscope of color from the confetti filled explosive sticks you can buy at any small Chinese store. The confetti, once exploded (really impressive site), littered the street.

So then I thought, things that blow up for our entertainment, are they super damaging one or two or three days in a year? I looked up news reports and found that indeed, fireworks are bad for the environment. But the articles I found suggested rather than the actual visual litter or noise levels being a problem, fireworks caused other concerns for the environment: they increase ambient temperatures (where ignited), deposit perchlorate in water resources (perchlorate, yes the carcinogen, but, not to worry, the amount reduces back to background levels within 3 to 12 weeks), and compound air pollution levels (there were actual warnings for people with allergies and respiratory problems about going outside during the firework display period).

No kidding. Even fireworks, such beautiful and awe-inspiring displays, have a negative environmental impact. Good to keep in mind on our next firework-filled holiday…

Here are some news reports from around the country: