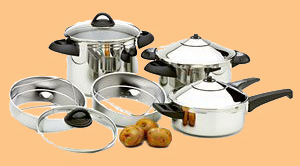 Pressure cookers are basically pots with elaborate lids that seal to allow pressure to build up inside them. A small amount of steam is released through a pressure regulator on the top of the lid to maintain the ideal PSI. Cooking food in one requires adding enough water to the pot, adding your food, sealing the lid carefully and turning on the heat. When the water comes to a boil, enough pressure is built up inside and heat is turned down to low to maintain that pressure.

Pressure cookers not only have the advantage of being an extremely energy efficient way to cook, but they also have nutritional advantages. Because food is cooked in less time and with less liquid that gets boiled away, more vitamins and minerals are retained. In addition to home cooking, pressure cookers are also used by mountain climbers at high altitudes to compensate for the low atmospheric pressure.

In the past, pressure cooking had the reputation of being an unsafe method of cooking with the risk of explosion. Since then, modern pressure cookers have drastically evolved to include 2 or even 3 safety mechanisms plus additional safety features, making explosion virtually impossible (obviously need to use common sense). Because of this I would NOT recommend buying a used pressure cooker or especially not using one you’ve inherited from your grandmother. The technology has changed enough to make a new one a really good investment, and you never know the history of an old one. If you do have an old one, I’d suggest keeping it and using the bottom pot part as a regular stovetop pot (without the lid).