Having already established everyone’s collective love for cute animal videos, it is now time to expand our horizons. 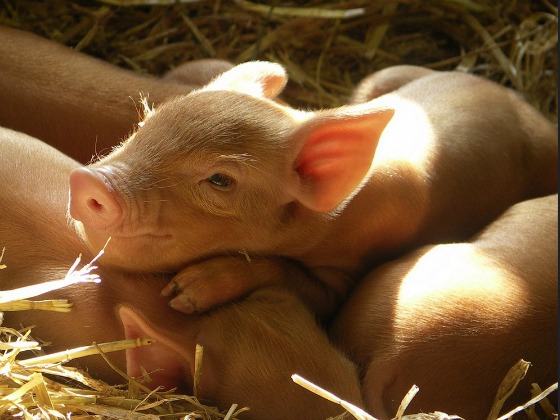 I love pigs. I can’t make it through Babe* without crying. Or Babe 2: Pig in the City, which is also amazing and tragically underrated. Sometimes when I need my cute piggy fix without the emotional upheaval of Babe, I turn to the wonderful land of the Internet, which never disappoints. I think that might be on an ancient scroll somewhere: “If you seek cute animal videos, you shall always find them on yon magic YouTube.”

The two piggies shown in the video are named Sprinkles (shut up, I know, I can’t handle it) and Tim. They are BFFs. Both are rescues. If you want to tell them apart in the video, Sprinkles has a short tail, Tim has a longer one. Sprinkles had his tail docked and was castrated sans anaesthesia (common factory farm practices). Both of these babies were rescued and given a home thanks to the wonderful Farm Sanctuary.

Baby piglets are adorable of course, but make no mistake: full-sized pigs are absolutely precious. Have you met Esther the Wonder Pig? Steve and Derek acquired Esther in 2012, having been told that she was a micro-pig. They soon realized that she was going to grow to be a full sized sow and exceed 500 pounds. Rather than abandoning her, Steve and Derek made room in their lives for Esther. They shared her with the world via the wondrous Internet.

When Esther outgrew their suburban home, Derek and Steve, through the magic of generosity, crowdfunding, and Esther’s charm, raised the money to open a farm sanctuary, Happily Ever Esther. Loving Esther provided the impetus for Derek and Steve to become vegans, to become advocates, and to rescue more animals. Esther changed their lives.

I always think about pigs at Christmas. It all comes back to watching Babe. 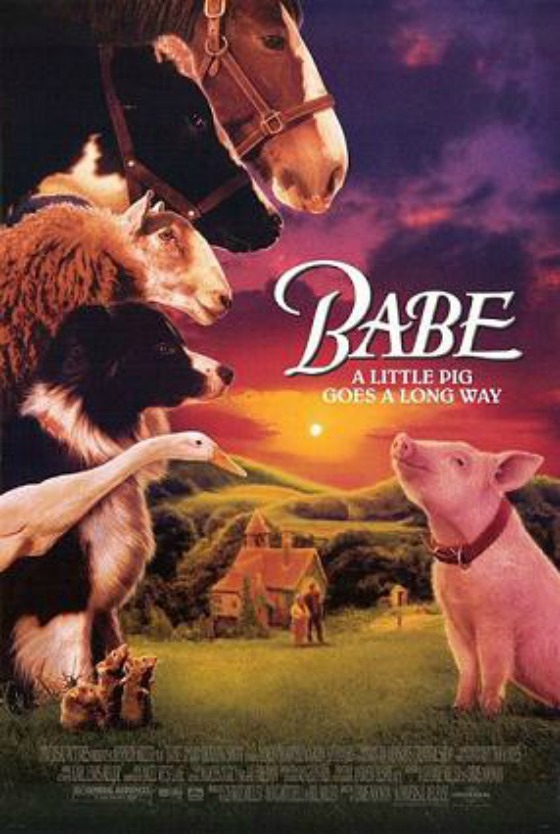 The movie is beautiful and sweet, and incredibly cute. But it also has very dark moments.

One of the most chilling lines in Babe comes from Ferdinand the Duck, explaining to the naive piggy-protagonist:

As someone who has always loved Christmas, that line always freaked me out. How could Christmas possibly mean anything but joy and togetherness, and snow and lights, and Bing Crosby?

When does Christmas mean death? When you’re a pig. 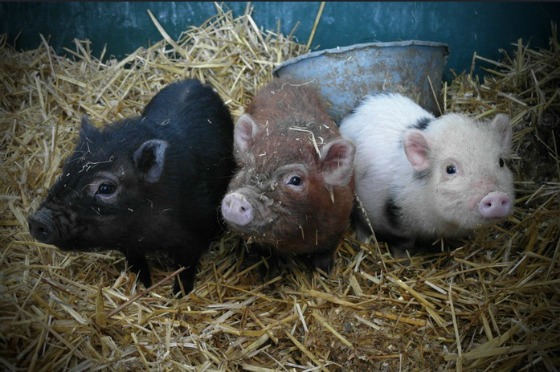 Eating a pig is a Christmas tradition in so many homes. You’ll note that I said “eating a pig,” not “eating a ham.” As a writer, and someone who knows how powerful language can be, I refuse to say “ham.” It’s distancing language, and I firmly believe that if you’re going to eat it, you should be reminded every second that what you are eating came from a living creature. That’s not “ham.” It’s a pig.

Pigs possess incredible intelligence and extraordinary emotional nuance. They are protective of their young. They are gentle. They deserve a peaceful Christmas, as do we all.

I strongly encourage you to avoid eating animals this Christmas (and the days beyond). Keep the spirit of the holiday alive in your heart through kindness.

If you want to share vegan holiday recipes, Christmas stories, or squeal (pun absolutely intended) about Babe, Tim, Sprinkles, or Esther, talk to us in the comments, on Facebook, or Twitter.

Have a kind Christmas, and a beautiful New Year. If you want to, start the year fresh with Veganuary.

*Did you guys know that James Cromwell became a vegan after working on that film? He’s the best.

Recycled Water is the Future. And No It’s Not Gross—Here’s Why