A few weeks ago, I wrote about the trend toward building entire subdivisions as car-free communities here in Germany; though these neighborhoods eschew cars and roads for bikes and courtyards, they also offer a bit of storage space to house the bikes (either as covered garages or, in the single-family homes, on porches).

In larger, more compact cities, though, there often isn’t enough room for residents to keep their bikes inside and the threat of theft is too great to store bikes outside (nearly every person I’ve spoken to in Cologne has had a bike stolen – hence the preference for buying cheap, unexciting, used bikes instead of mountain or racing bikes). To keep people riding, then, cities like Copenhagen offer cycles free of charge to riders (the cost of the bike is supported by advertisements). All you need is a Euro coin as a deposit to unlock the bike; you get the coin back when the bike’s returned to a station in the city and locked anew. 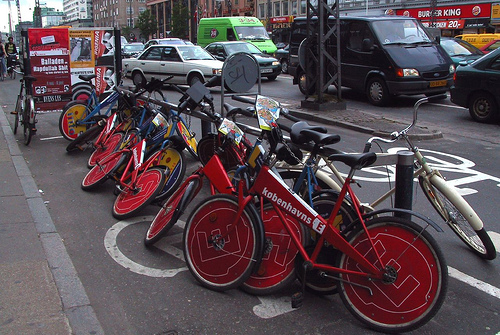 Lyon has a similar program, though you pay a small amount for each ride; it’s a popular way home for students after late-night dinners with too much wine. Now Paris is trying it out, too. From The New York Times:

The program, Vélib (for “vélo,” bicycle, and “liberté,” freedom), is the latest in a string of European efforts to reduce the number of cars in city centers and give people incentives to choose more eco-friendly modes of transport.

“This is about revolutionizing urban culture,” said Pierre Aidenbaum, mayor of Paris’s trendy third district, which opened 15 docking stations on Sunday. “For a long time cars were associated with freedom of movement and flexibility. What we want to show people is that in many ways bicycles fulfill this role much more today.”

Users can rent a bike online or at any of the stations, using a credit or debit card and leave them at any other station.

A one-day pass costs 1 euro ($1.38), a weekly pass 5 euros ($6.90) and a yearly subscription 29 euros ($40), with no additional charges as long as each bike ride does not exceed 30 minutes. (Beyond that, there is an incremental surcharge, to make sure that as many bikes as possible stay in the rotation.)

I’m really excited that this idea is catching on; wherever my husband and I travel, we rent bikes to get around the city and these ad-sponsored cycles take some of the worry out of having the bike stolen. And as tourists, we see more of the people, the architecture, and everyday life by bike than by subway, so it’s a treat I wouldn’t want to give up. I just hope someone brings this idea to the US soon … because while it’s easy enough to make the car-free lifestyle choice in your hometown, getting around as a tourist is a bit more difficult to do and a program like this takes some of the worries away. So you can spend more time indulging in the arts and wine and not worry about hitting the wrong Metro home or trying to navigate a hatchback down one-way streets cobbled together with tiny stones.

Cameron Diaz and Gisele Bundchen Being Ridiculously Hot (and Green!) in June Vogue