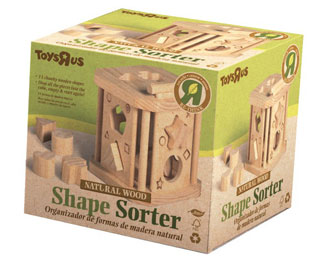 This week Toys R Us announced that it is launching a new line of green toys to be released by Earth Day, April 22nd 2008. I tend to be skeptical when bigger companies like this try to hit a marketing sector they may have previously missed. The Forest Stewardship Council has granted certification to the wooden toys, testifying that they are sourced from well-managed forests. There will be organic cotton dolls along with dolls that claim to be “natural.” These “natural” dolls are presumably from non-organic cotton, which is one of the most pesticide-laden products we consume.
It is a beginning for the toy giant. A few natural toys doesn’t really make a dent in the thousands of plastic, PVC, chemically engineered toys that Toys R Us sells, but perhaps moving in this direction will help the company to mend its ways?

How to Light Up Africa?

How to Rock an Ugly Christmas Sweater, Eco Chick Style