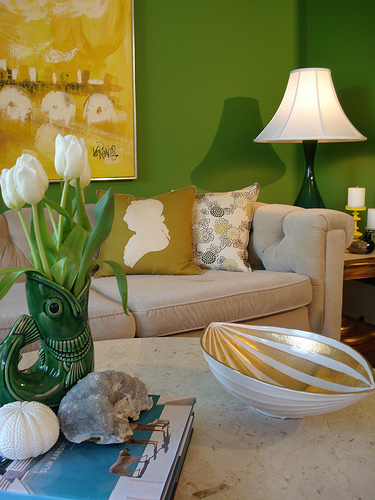 Not too long ago, Starre asked me if I would do a Q&A with Los Angeles-based green interior designer Deana Bracken. Honestly, I felt a little skeptical at first—if only because I consider milk crates furniture. (As long as I can set my book or my beer on it, what does it matter?) But then I checked out some of Deana’s work and I have to admit that I’m warming up to the idea of “home,” especially if that home is green. Plus, I discovered that Deana and I share an affinity for Johnny Cash and, if you ask me, an appreciation for Henry David Thoreau’s idea of “living deliberately.”

Q: Here’s a cream puff question to start off with. How would you describe your work and what has led you to it?

A: I would say my work is the marriage of high style and sustainability for homes big or small, sleek, glam, gothic, mid century – whatever. As I design, I never, never stay within one era or “established” style – that’s a total yawn. And I infuse as much eco-friendliness as my client will allow. Some clients come to me knowing that protecting the planet is one of my greatest concerns. Some don’t initially consider the “sustainable” side of my work relative to their project, but in the end I think each has walked away with a greater understanding of and respect for our environment.

I’ve always been drawn to design elements from the past. I grew up in Chicago surrounded by the feats of Mies van der Rohe, Frank Lloyd Wright, and David Adler, so pretty early on I was exposed to some of the best modern, traditional, and downright revolutionary works of architecture and furniture. That’s not to say there aren’t some brilliant contemporary architects and designers forging their own exemplary paths today—Philippe Starck, for one—but I’ve always cozied up to seasoned pieces. My passion is to restore heirloom or even discarded items – and once I got hip to eco-friendly finishes, everything seemed to fall into place. 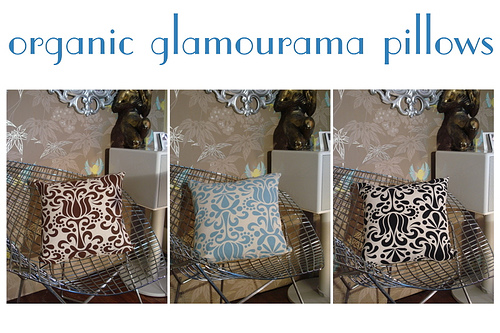 Q: It seems like one of the environmental movement’s handicaps is that people associate it with deprivation and guilt. If you buy a new pair of shoes, Al Gore will haunt your dreams. What are your thoughts on that and how does your work challenge that notion?

A: Al Gore doesn’t haunt my dreams—though, that is quite an image!—and I live a fairly “glossy” lifestyle. I think it’s all about making responsible, informed choices. A lot of us walk around in a haze not knowing or caring about what we consume, where it’s coming from, and who it might be harming in the process. It’s willful ignorance – and it drives me crazy! I’m bent on proving that any lifestyle or aesthetic—except for those few who enjoy being absurdly toxic and wasteful—can be achieved while still being environmentally mindful. If a bike or electric car, used Levi’s, and Patagonia aren’t for you – the highest of the high-end department stores sell some organic and fairly-traded goods, convenient stores are stocking organic snacks, lexus makes a hybrid… I mean, come on! It’s out there. And once we create a solid market for responsible retail, more and more companies will turn to “greenifying” their goods.

Personally, I prefer to re-use – especially furniture and home décor. Most of what’s in my home originally had a life somewhere else, but I do totally support those who are pioneering new sustainable goods and methods. In fact, I’ve designed a pillow line that employs gorgeous, organic textiles from Mod Green Pod contrasted with hemp fabrics, kapok inserts, and are hand-crafted by my neighbor and artisan, Elizabeth O. And if I do say so myself, said pillows are pretty darn chic!

Q: Along those same lines, I laughed out loud when I read on your website that your mother thought nothing of driving 45 minutes to recycle a sandwich bag full of AA batteries, but I think that it also goes to show that we all live with contradictions. Any thoughts?

A: I guess I did phrase that carelessly…I don’t think my mother ever made a specific trip to recycle batteries – she would carry them around until she was in the vicinity of the area’s only drop box.

Anyway… yes, my mother, myself – we do all live with contradictions. I encounter them more in my work than anywhere. The majority of my clients are not as eco-focused as I am, so I consider a large part of my job is to present them with environmentally sound options. Every one of them has taken to using earth-friendly paints – which is fantastic. I buy for them as much vintage & antique furniture as I can, my upholsterer uses kapok filling, rather than synthetic, we use organic textiles when possible, but do they always go for the “green”?… No. Does it kill me a bit when a client insists on new leather sofas rather than recovering a thrift store find with a deadstock fabric?…Yes. But as long their decision is made after assessing other, more “thoughtful” options, and in the end their living space looks and feels incredible – I have done my job. 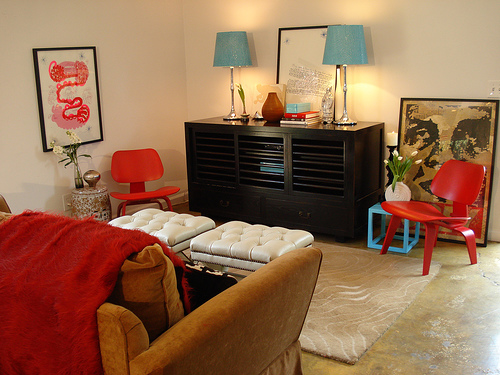 A: If I understand the question—black hole referring to “sorry state of” rather than “vacuum”—I disagree that Los Angeles is a black hole. In fact, I would say some of the greatest green design pioneers are based in L.A. When I first learned of the work of architect David Hertz—6ish years ago– I was blown away. His buildings are so stylish and responsible at the same time – truly inspiring. And Marmol-Radziner is creating ground-breaking sustainable pre-fabs. These people are the “Schindlers,” “Neutras,” and “Lautners” of today. Not to mention THE “ecohome” is a handful of blocks from my house.

Also, I am a true eastsider – I’m surrounded by people driving vegetable oil cars & hybrids, farmers markets, community gardens – and incredible music—which is in it’s own right—totally inspirational. That’s not to say there isn’t major room for improvement in my neighborhood, but being around progressive, environmentally-focused people, who, by the way, are pointedly non-hippie-ish, seems to resonate positively.

That being said, the down-side to Los Angeles would definitely include ridiculously oversized houses, the obscene amount of solo people driving gargantuan SUVs … and the massive amount of consumption overall. I’m personally embarrassed for those who brag about having 60 pairs of the latest jeans or 25 current handbags. Collecting is one thing, consuming another.

The irony is that a solid portion of what inspires me visually comes from the bravado of that Zsa-Zsa Gabor/Ira Gershwin/Edie Goetz-type westside style. It reminds me of my grandmother—my style icon. It’s an elegant, yesteryear approach to living (let me remind that I’m waxing nostalgic visually, not socially.)… when entertaining was an art form and mixing aesthetics was thoughtfully executed. I’m obsessed with well-designed vintage furniture, china & pottery, textile patterns, and landscaping. Los Angeles has historically drawn risk takers in every capacity and their imprints are not only prominent all around the greater area (from the Watts Tower to the Chateau Marmont), but the physical evidence of their style still exists. In scouring the thrift stores, auctions, and flea markets around here, I find an incredible wealth of brilliant – and discarded—pieces. I’m a great proponent of “re-use” and my clients reap the benefits of the style-driven Angelenos from the past.

A: When I boil it down, I realize that what truly draws me to Johnny Cash is the texture of his voice (and the power of his conviction – whether it’s with humor, tragedy, or love. I then realized he was at his best when he shared the stage, harmonizing that booming, gritty voice with others. One of the best songs he ever recorded is a duet with/written by Will Oldham called “I See A Darkness.” It’s so beautiful. Another song of his I particularly fancy is “Jackson” which he sang with his beloved, June Carter. Another, “I’m Leaving Now” with Merle Haggard…I’m all about juxtaposition.

If You Must Dryclean….