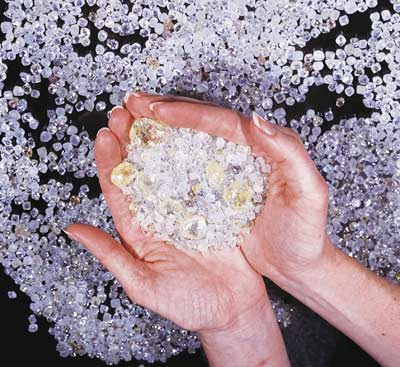 “I don’t understand about diamonds, and why men buy them. What’s so impressive about a diamonds except the mining?” 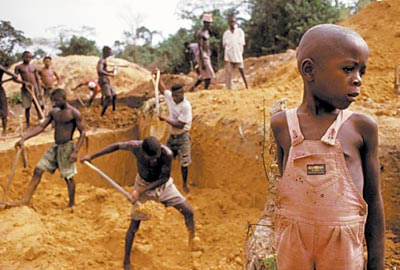 Many of the prisoner-laborers who work Sierra Leone’s open-pit mines end up in shallow graves, executed for suspected theft, for lack of production, or simply for sport. (© Jean-Claude Coutausse/ CONTACT Press Images)

A few years ago, I asked for jewelry for Christmas; I wanted my boyfriend to give me something that I could wear and be reminded of him. When he gave me a pretty sapphire and diamond necklace, I tried not to be horribly disappointed. After I explained why I wasn’t into the gift, he gallantly returned the expensive necklace and exchanged it for a gorgeous green amber amulet for half the price. Amber I can love: Composed from the preserved living blood of a tree, it often contains pockets of ancient air, or even an unlucky insect, and catches the light in ways that a diamond never could.

Maybe its because I studied Geology in college that I see diamonds differently than most women. To me they are just cold carbon chains, unique from common coal and graphite only in the way the atoms line up. Diamonds have a crystalline lattice structure as opposed to coal’s earthy conglomerate one.

But I’ve determined that its neither geology nor taste that is the real reason that I don’t want a diamond ring (or teardrop earrings, or a honking diamond necklace when I strike it rich) one day. It’s the fact that the majority of diamonds are made from the backbreaking labor of the African people who mine them (who make about $30 a week officially, but usually make half that) and the Indian people who cut and polish them (the average price to cut a stone is about .25) Diamonds are also used to fund wars: Rebel leaders in Sierra Leone have used diamonds to pay for weapons that have thus far killed 75,000 and left 12 million homeless. Since Americans buy 65% of the world’s diamonds, you can bet our lust for the gems has financed murders.

Most poor countries have few laws to protect the environment and even less to enforce them. Diamond mining opens gaping holes in the Earth and pollutes the water as topsoil and mine ‘tailings’ (toxic chemicals) wash into surrounding waterways. I’ve seen this first-hand in the US, where there are regulations, and lets just say ‘destroyed landscape’ pretty much sums it up.

On top of all of this, diamonds are a racket. It costs less than $10.00 to dig a .8 carat diamond out of the ground, polish it, and ship it to the US, where it will be sold for $1000 or more. Diamonds are only valuable because companies set artificial price controls. Diamond marketers spend billions yearly on advertising to convince us that diamonds mean love, power and exclusivity, when really they are plentiful and cheap.

The production and distribution of diamonds is largely consolidated in the hands of a few key players, and concentrated in traditional diamond trading centers (the most important being Antwerp). The De Beers company holds a clearly dominant position in the industry, and has done so since soon after its founding in 1888. De Beers owns or controls a significant portion of the world’s rough diamond production facilities (mines) and distribution channels for gem-quality diamonds. The company and its subsidiaries own mines that produce some 40 percent of annual world diamond production. At one time it was thought over 80 percent of the world’s rough diamonds passed through the Diamond Trading Company (DTC, a subsidiary of De Beers) in London, but presently the figure is estimated at less than 50 percent. De Beers used its monopoly position to establish strict price controls, and market diamonds directly to consumers in world markets.

You can read more about Amenesty International’s experience with diamond mines here. And don’t let me get into gold mining…(that will have to be a future post).

If you or your loved one insists on a diamond, there are thousands of vintage stones out there; you can use one to create a new ring or necklace, or enjoy a more old-fashioned style. There are also many great sustainable jewelry companies out there, and there IS the option of ‘conflict-free’ diamonds from Canada, but for me, the environmental consequences of any kind of mining are too extreme to justify it, even if the miners are paid a fair wage.

Green Goes to the Dogs