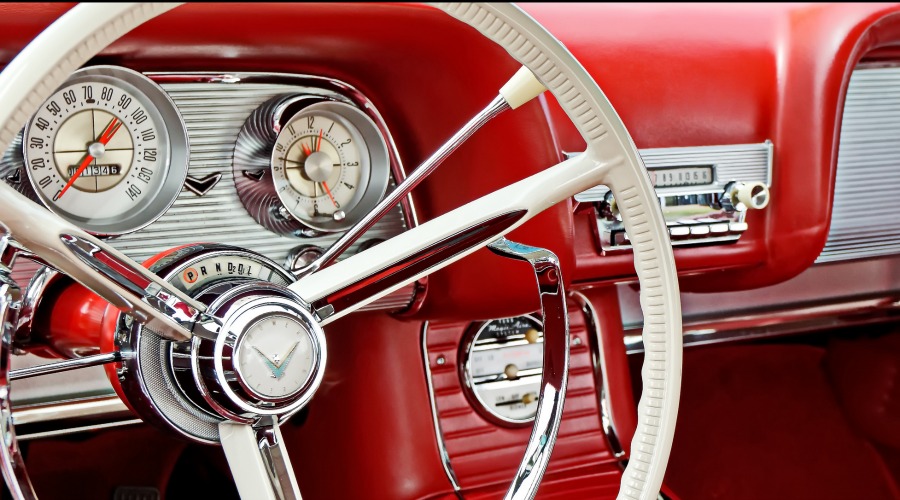 Ok, my car stereo is old. But not as old as this 1960 Thunderbird! It sure is pretty though….

I didn’t grow up with much money. Which was sometimes awful, and sometimes very wonderful. I think Patrick Meagher said “Some people are so poor, all they have is money.” Meagher may have originated the quote, but I assure you, my mother gave it the most air-time. If you don’t have much, you develop a real appreciation for things that are often overlooked, like library books, contest giveaways, tag sales, thrift stores, the kindness of strangers, free samples, and outdoor concerts.

I have curated a collection of free and/or cheap entertainments that are just as enjoyable whether you are broke, rich, or somewhere in the middle. My commute to work is long, so this roundup is a collection of the free auditory wonders that make my morning drive humorous, or educational, or enchanting.

I hope this doesn’t seem too obvious, but it is a true classic: National Public Radio. If you listen to it, you know what I’m talking about and I won’t need to explain. But if you don’t already listen to NPR, I urge you to believe the hype. Give it a shot. I listen to NPR so often that I know the exact place on the highway where the signal becomes clear (I live near the mountains, and the signal fades near my home). That hour of the morning (Morning Edition) is usually devoted to news coverage, but you also hear incredible stories, music, arts coverage, etc.

Some of the most interesting music journalism, I would argue, is on NPR. You can preview songs or read articles about musicians, or the science or history of music, or how people personally respond to music. You also get local stations, depending on where you tune in (mine is WNYC) and can get local and global news coverage.

My car stereo is old, so I can’t actually listen to anything via Bluetooth. It’s radio or bust. I can burn a CD and listen to that, but if I leave the CD in there for more than a few hours it tends to get stuck. But I love podcasts. So I listen to them on my iPhone while I drive. I usually put my phone in my breast pocket or wrap it into my scarf, so I can actually hear. I set this elaborate nonsense up before I start driving, obviously. I hope I don’t need to tell anyone not to mess around with their phone while driving. Anyway, what podcasts could possibly be worth all of this hoopla? It’s actually a threeway tie between  Our Hen House, Citizen Radio, and The Atheist Experience.

Our Hen House is one of the definitive resources for anyone who loves animals. Their mission is to “effectively mainstream the movement to end the exploitation of animals.” And they do so with informative articles, interviews, reviews, and personal stories. I have laughed and cried within the same five minutes of that program, and I’m not a wildly emotional person. Despite the sometimes dark and often sad material they discuss, Jasmin and Mariann, the program directors, are “indefatigably positive.”  As a new vegan, OHH has been an amazing resource for me.

Citizen Radio shares similarities with Our Hen House. Like Jasmin and Mariann of OHH, Allison Kilkenny and Jamie Kilstein are vegan animal rights activists. But the scope of Citizen Radio is somewhat broader than animal rights. The show bills itself as “Independent Radio that Won’t Lead You to War,” though it does certainly make me want to get up and fight. Allison and Jamie cover current events that are ignored or misreported by mainstream media, and they do so with humor and profanity (things that mainstream media could sorely use).

All of the programs that I’ve listed so far are somewhat suitable for work, with the exception of Citizen Radio (unless your boss doesn’t mind hearing the word “fuck.” A lot). Allison and Jamie actually just published a book, called #Newsfail, which I pre-ordered. Yes, in my roundup of free things, this is a thing I actually bought, because I want to support these two that much!

The Atheist Experience is a cable-access television program based out of Austin, Texas. The episodes are also available as podcasts and can be watched on Youtube. The show is produced by the Atheist Community of Austin, and is partially geared at non-atheists. The goal of the show is education and discussion. Whether or not you are an atheist (I am, proudly), if you want to see some incredible debate skills, look no further than Matt Dillahunty.  The show is a live call-in program, and people from all over the country call in with their questions, viewpoints, and accusations. One of the best moments of the show is when a caller tells Matt (after confirming that Matt became an atheist after studying to be a minister) “You are the devil.”

The Atheist Experience seeks to “develop and support the atheist community, to provide opportunities for socializing and friendship, to promote secular viewpoints, to encourage positive atheist culture, to defend the first amendment principle of state-church separation, to oppose discrimination against atheists and to work with other organizations in pursuit of common goals.” I was first introduced to this program by my boyfriend. He would listen to the program while I was asleep (we keep odd hours) and I must have been absorbing it because I would wake up looking to debate anyone who sat still long enough. The show is also incredibly funny; the “You’re the devil” remark was during the show’s themed episode: “Intolerance.”

Free media will never cease to amaze me. I am in awe of the work that goes into blogging and promoting and producing these incredible programs and others like them. They don’t demand subscriptions or credit card numbers, or annual renewals. As the brilliant Amanda Palmer so eloquently put it in her TED Talk (more terrific free media!), they simply ask for support. I strongly encourage people with the means to support the causes and programs and art that they believe in. Since this is a roundup of free content, I will also suggest that support is not just financial.

Support can be recommending a program to someone who might like it, writing about it, sharing it on social media. It definitely includes subscribing, liking, and commenting on content. I used to just “lurk” on websites that I loved, but now I make sure to be an active presence. It is the best signal boost you can possibly give to someone producing free media. Not only does this assist those creating whatever you enjoy, but it may even reach someone with empty pockets who could use the inspiration, education, support, or laughter.

I always want to know about new free media, please feel free to share your favorites in the comments, or on the Eco-Chick social media platforms: Facebook! Twitter!

5 Gorgeous Female Vocal Traditions From Around the World