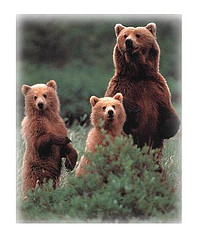 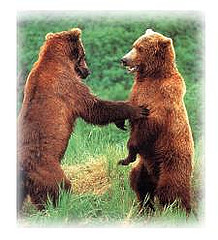 OK, so this post has nothing to do with bears, but it does have to do with good news.

Green Revolution is Heralded for Scotland – “ALL new property developments in Scotland will need to produce some of their own electricity through a micro-renewable generating plant, under one of Britain’s most radical energy initiatives unveiled by Scottish ministers yesterday.” Go Scots!! See more here. Thanks to RemyC for the link.

U.S. Navy Ordered to Shove It– “Two weeks ago, NRDC attorneys raced to court to block the U.S. Navy from unleashing a barrage of ear-splitting sonar into the waters off Hawaii as part of a massive military training exercise. Whales exposed to mid-frequency sonar have repeatedly stranded and died on beaches around the world — but the Navy refused to adopt even common-sense measures during peacetime exercises to help protect marine life from this deadly threat.

In an infuriating attempt to avoid our lawsuit, the Navy took the unprecedented step — on the eve of the Fourth of July weekend — of declaring itself exempt from the primary U.S. law that requires measures to protect marine mammals. But the court sided with us and found that the Navy’s planned sonar use violated a second key environmental law as well, noting that NRDC had submitted “considerable convincing scientific evidence” of the dangers of sonar to marine life.

The judge prohibited the Navy from going forward with its sonar use as planned and ordered the Navy to sit down with NRDC and decide on a set of protective measures to be put in place during the month-long exercise. In the settlement reached last Friday after days of tough negotiation with our attorneys, the
Navy will be required to create a sonar-free buffer zone around the newly established Northwestern Hawaiian Islands Marine National Monument, as well as significantly improve its monitoring of marine mammals during sonar drills and
implement other important safeguards.” Yay Judge!! See background video narrated by Pierce Brosnan here.

A Bright Side to Hurricane-Ravaged Gulf Coast? – A host of environmental groups are working to use Hurricane Katrina’s impact to clean up, green, and fund environmental projects in historically ignored (environmental racism, anyone?) areas of New Orleans and in Mississippi.

“DeJean is optimistic about the future. “Nobody paid attention to Gert Town before the hurricane,” she says. “Now we have people calling us and asking if they can work with us. And we do have some input into how we want our communities to look not just for today, but long range. We want our community revitalized, and I think the chances of that are good.

And Rolfes thinks Katrina has shifted the ground not just literally but politically too. “In Saint Bernard Parish, for years there’s been this untenable situation in which people actually share a fence with a refinery. Before Katrina it would have been unthinkable to talk about putting in a buffer zone between the residential area and the industrial area because people just accepted that situation. Now individuals and even the local government recognize that a buffer would be a good policy. And I think we’re going to get one.” Read about all the positive environmental changes in E Magazine here.

Eco Fashion for the Harley Set

Eco Chick Giveaway: Pamper yourself with a Spa Night from Pure Habitat