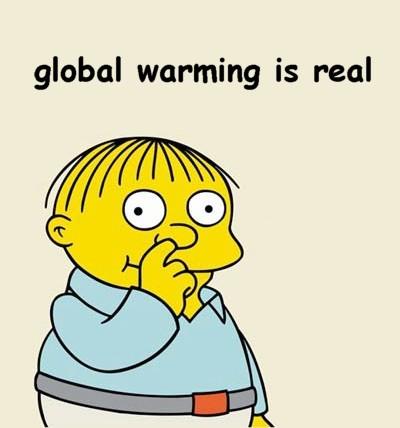 If Ralph knows it, you REALLY should know it.

The Intergovernmental Panel on Climate Change told us earlier this year that we’re basically all screwed. That the poor are even more screwed. And that we need to do something about it. Today they will be releasing the fourth report, where they will tell us what we can actually do, and really… the requests and reccomendations aren’t all that surprising.

Basically, from the reports that I’m seeing as previews, we need to divert substantially from using the energies that we’re so used to using today. We need to invest more money into sustainable energy and promote sustainable energy use. Give incentives for buying clean energy and make more products that don’t use theh extensive and dirty energies.

All night talks in Bangkok went on as economists, scientists and government officals discussed how they would tackle the problem of huge emission levels from the oil and gas industry. The parts per million of C02 in the air have raised more than a third since the start of the industrial revolution, and now is the time to hault these emissions to spare the earth some pain, and people in developing countries. If the there is a deley on action the greehouse gases in the atmosphere could raise by an additional 90% by 2030, on top of the 70% increase we’ve had since 1970. C02 is extremely important to keep our eye on because so much of it is produced every year (25 billion tons…) and it just sits in the atmosphere making it progressively worse.

The report will conclude that significant progress can and should be made with in the next 25 years with technological advances/shifts and huge policy changes. The most important of these technologies obviously being cleaner energy. The message of the report is very clear. There is no reason, what so ever, to now be sitting around waiting for the “science” to back up unreasonable environmental policy. We have the right science that can now be used and kept in mind – it should push governments and citizens to see the need for change. There is no need to wait any longer for change.

To stop the ever increasing emissions in the air governments are going to have to do some things that people are really going to hate, such as fuel taxes and garbage fees. Also countries such as China will need to slow down their development. The final version will state that C02 levels need to be brought to the 2000 level by 2030. To do this it would cost $50 to $100 a ton which is on par with the price of fossil fuels if the price continues to raise the way it has been.

The effects of the change are going to hit the global economy, resulting in an overall reducation of about one tenth of a percentage through 2100. That figure was highly disputed, some say it would have a far greater impact than this and that more research needs to be done on the topic. But many say the investment as a reasonable one, given the alternative.

No one really knows what the future holds. But these reports that we’ve seen have most definitely shown that if there is no action there is going to be extremely hefty and detrimental impacts happening not only to the environment but to all the people living within it and relying on it. 100 years ago none of us would have had electricity or a car so many in 100 years there won’t be any again? Or maybe we’ll all have solar panels attached to our backs. Who knows.

Here is a Q & A with one of the scientists that was present at the Bangkok talks.

(Cross posted at lib-deb and appletree)

Coulter Quips: Why She is a Bitch

Advice From an (Almost) Adult: Indulging in Me Time