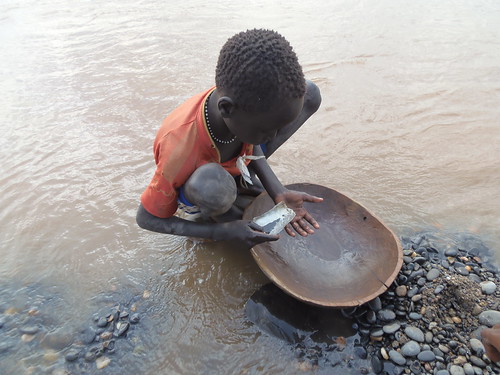 When I was conducting field interviews about dam displacement in rural Ethiopia in 2012 I stumbled across a community activity I did not expect to find: panning for gold in the Nile River. Artisanal Small-Scale Gold Mining (ASGM) supported the otherwise subsistence lifestyle of the Gumuz People (an ethnic minority of about 200,000) providing cash for school fees, fish nets, salt, and plastic shoes.

A few months later doing similar field interviews in rural Laos in 2013, I found that the subsistence communities there were also panning for gold—this time in the Mekong River.

Knowing these communities had no chance for contact – both living relatively off-grid and on separate continents – I wondered: How common is gold panning and gold trading in the modern world? 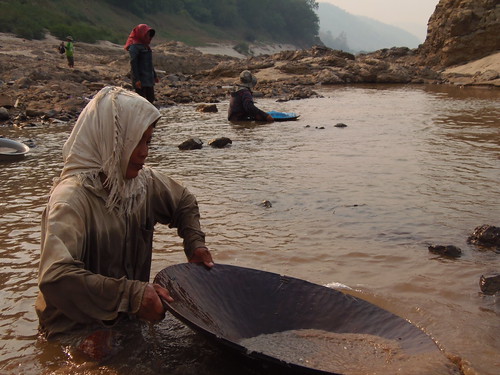 In short—very common. You don’t need much, and rewards can be significant for those willing to put the time in. And the people doing the panning are unlikely to be aware of the impacts to their health.

The implements for ASGM that I saw in the field are similar what you see in photographs of 49ers in the Western USA during the historic gold rush in the 1840s that famously brought people to California.

They use a simple bowl for capturing and sifting silt, and another simple container to hold the gold once it is separated from the silt. Today in Oregon, where I live, you can purchase gold panning equipment in a convenience store, alongside potato chips. The implements are usually made of plastic and contain a metal screen for sifting out nuggets.

That’s pretty much it. Except in most places, gold isn’t found in nuggets, it’s collected in tiny quantities—flakes, even. And to get at it you need more than plastic bowls with a metal screen. You need mercury.

To read the rest of this post, click over to our sister science site, The Curious Human.

Boys and Girls Club "Be Great, Be Green" Contest Finalists: Saving the World, and ADORABLE!

Chic Scents from Tallulah Jane and A Perfume Organic