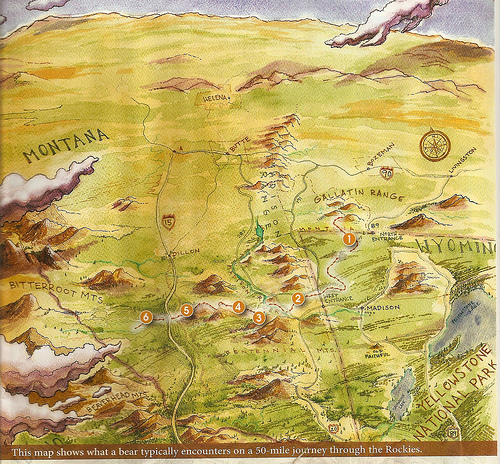 This map, scanned from Patagonia’s latest catalog, details a grizzly’s 50-mile journey, which in the world of a bear, isn’t even really that far of a trip- they’ve been known to travel 500 miles or more as part of their natural movements.

“For many wild animals, to roam means to survive.” I can relate. I’ve lived all over the world, and feel the deep desire, seemingly necessary to my well-being, to travel to far-off lands (or at least a couple states over) on a regular basis. For people, it’s easy to get around; we just have to choose the method. Car, plane, bike, train, snowboard, rollerblades, or feet?

Us humans are even guaranteed the Right to Roam in many countries. Animals? Not so much.

Since our furry brethern don’t have such rights, there is less land for them as we expand over the landscape. Not only less land overall, but the land that is so munificently set aside by us humans is usually fragmented, conserved in chunks separated from eachother by highways and roads, fences galore, angry humans, and housing developments.

Big animals need big spaces. If territories are balkanized by highways, energy development and housing, the long-term survival of large mammals – as well as the multitude of smaller creatures connected to them – is jeopardized. Imagine it this way: As writer David Quammen has noted, if you cut a beautiful, handwoven Turkish rug into 36 pieces, you don’t end up with 36 Turkish rugs. You have instead 36 worthless remnants.

If you’re a large animal like a bear, moose, or wolf, you’re screwed. Even though you need to roam- to migrate, find new food sources, to find new mates to increase your line’s genetic hardiness…in short, to survive and propagate- you are faced with being run over by a semi or shot for being in the wrong place at the wrong time. Just for doing what comes naturally to you.

But there IS a solution. Greenways, or wildlife corridors are recognized by conservation biologists as a means by which animals can move from one protected piece of land to another, letting the animals do their thing, with the added bonus of keeping them out of our garbage. I love bears, but I don’t really want to come face-to-face with them in my yard, I must admit. 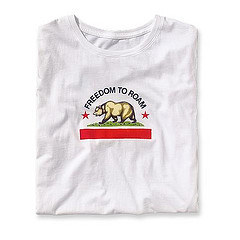 Freedom to Roam is a partnership of conservations organizations, recreation groups and companies dedicated to establishing migration corridors between protected areas. Patagonia is supporting the organization with the sale of these organic t-shirts, above.

To condemn the condom, or not…