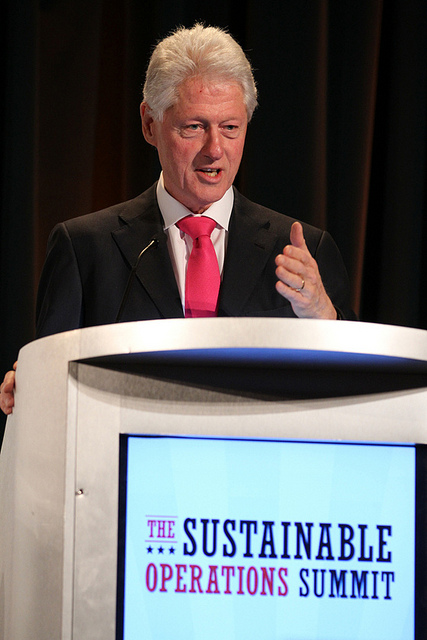 President Clinton, speaking at the Sustainable Operations Summit in NYC

The Sustainable Operations Summit brought together political and business leaders from around the globe to discuss innovative approaches to reduce our impact on the environment with a focus on energy, resource conservation and the built environment.

I attended the summit at the Hilton New York in Midtown Manhattan yesterday, and listened to some of the brightest minds in sustainability such as President Bill Clinton and Trudie Styler.

Trudie, along with her husband Sting, have worked tirelessly to be a voice for rainforests and their inhabitants for over two decades. Together, they founded the Rainforest Foundation International in 1989, which has protected over 28 million acres of forest land since its inception and was one of the first organizations to focus on the vital link between protection of the rainforest and securing the rights of indigenous peoples.

Trudie gave a powerful, hard-hitting speech yesterday. She’s the kind of orator with that natural ability to gracefully touch the crowd with her words — like President Clinton — without shtick or self-promotion. Here’s an excerpt of her speech:

“It’s always the same tragic tale, sometimes it’s about oil, sometimes it’s about mining, or cattle ranching, but whatever it is, it’s always about profit. And nobody is making businesses pay for the priceless assets that they’re stealing. We have oil companies, loggers, cattle ranchers, soy bean farmers, they’re raping the forests and the rivers and depriving the indingenous people of their basic life sustenance. Not secretly, but brazenly and with a sense of entitlement, and the world simply shrugs and says ‘it’s ok.’ And all of our governments say ‘it’s ok.’ Because, what was once considered illegal, is now ‘just business.’ Well guess what, no it’s not OK. It has to stop. In the last 40 years almost 20-percent of the Amazon has been destroyed in the name of business. That’s a 20-percent reduced capacity to absorb greenhouse gases. And it’s getting worse.” 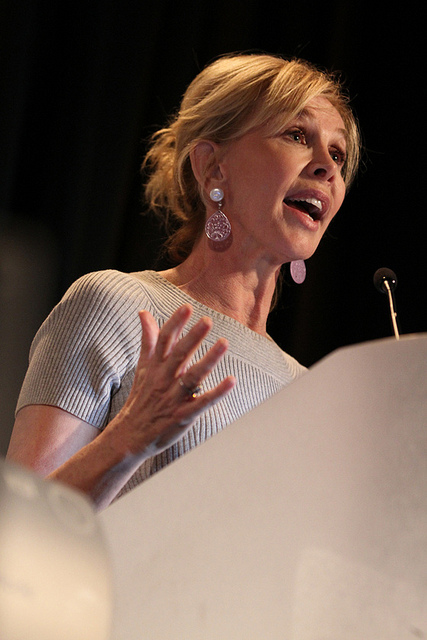 Trudie Styler, speaking at the Sustainable Operations Summit in NYC

But of course, President Bill Clinton stole the show, as he always does. I’ve yet to meet a soul who isn’t blown away by the ex-prez’s ability to address — and get a few hearty chuckles from — a crowd.

He did just that when he kicked things off with, “Chill out – sometimes this stuff takes years.” The President was expressing frustration over how long it is taking for the U.S. to move forward on clean energy and energy efficiency. President Clinton said there had been mild progress but that the upfront costs of adopting better technology in rough economic times, as well as a cultural resistance to change, remained significant obstacles.

“We are too wedded to the way we’ve done things,” Mr. Clinton said. “It’s psychological as well as financial. We have to liberate ourselves from that.” He encouraged the audience to lead “by argument and example” to convince people that sustainable growth is the only kind of growth that makes sense long term. “Keep doing the little things that add up,” he said.

President Clinton also called on the media to take a more responsible approach to reporting. He cited the story of how the leading climate skeptic, Richard Muller, came out and said that he believed man-made climate change is real. As Clinton explained and how the story goes, Muller had undertaken a study of global climate data that was partly bankrolled by a foundation connected to global-warming deniers, so the conclusion of the study seemed preordained. But to climate skeptics’ dismay, perhaps even worst nightmare, Muller announced that his review convinced him that the planet is indeed warming.

President Clinton argued that this story should’ve received huge mainstream media focus, but instead, it was passed off as though the media was simply reporting on a sports game. 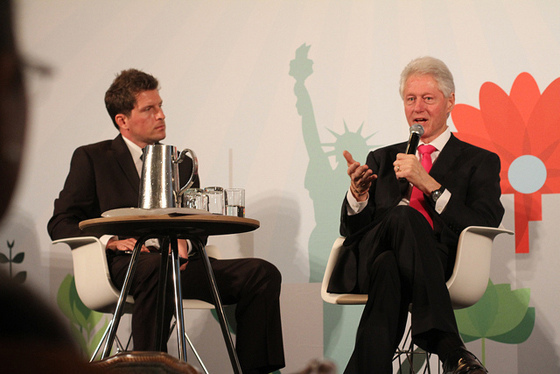